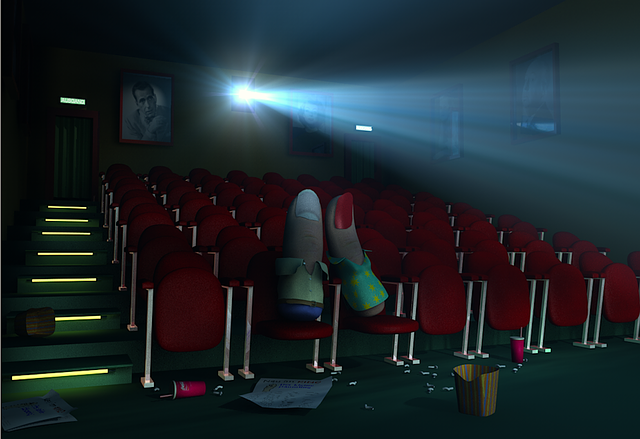 There I was. Sitting in the movie theater for the premier of my independent film Running on Empty Dreams. Between100-150 people attended, which was a pretty good turn-out for an indie producer in one theater for one night in the film community in Arizona.

I was sitting in the dark theater holding the hand of the man who was my husband at the time. People surrounded us in their own comfortable seats, mostly behind us and a few in front. Most filmmakers are concerned with how their film is perceived by the audience. However, that wasn’t the only distraction on my mind. Don’t get me wrong – I definitely cared about what my audience thought of my film. I’m an artist, and only human, so the constant desire to be “good enough” is always a dominating thought. Nevertheless, there was this pulling on my heart throughout the whole two hours. The draw was so overwhelming that it felt like a tug of war between my proverbial heart and the life that I created with the man whose hand I was holding.

My film is about a married woman who falls in love with a single mom. Unfortunately for my husband, it was very autobiographical of a part of my life – our lives. Yet for me, that night, it was revelatory as the digital image played my life back to me. The actors were speaking my lines that I had directed them to say, the very same words that I had written years earlier in my script. My dream of being a produced filmmaker had come to fruition. The moment was surreal.

But it was more than just being the next indie producer. And it wasn’t until that very night that I realized that the moment was also about coming into my own. After a seven year process from script to distribution… I had to have an uncomfortable conversation with the father of my only son. The man who jumped on board my dream as a production manager and producer to help spearhead the film into existence had to hear the words “I’m gay.” Those words passed through my lips like a loud whisper that he thought he heard years prior, but was made so painfully and evidently clear in this moment. He wasn’t aware that the very project he helped to create had simultaneously destroyed a marriage… his marriage… our marriage. I didn’t know that either. I felt like it was a way for us to both heal, but it turned into a new beginning instead.

I had to realize that the death of our marriage, the “ending,” if you will, was indeed, a “beginning.” What is the lesson here? I could use the cliché of the need to “follow your heart” when drawn towards something, but that’s not enough. Sometimes we get angry, and following our hearts in those moments are NOT the best solutions. However, the lesson that I’m hoping that you learned is that you have to do what is right for you AND everyone else involved. You may say, that’s impossible to do, but not so. I’m a better mother to my son because he truly knows who I am as a person. I have been a better friend to my ex-husband than I could ever be as a dishonest wife to him. My son gets the opportunity to learn how I conduct myself as a genuine, self-aware person, and I’m hoping that he will mirror my integrity and honesty in how he conducts his life.

My favorite film of all time is A Beautiful Mind (2001) staring Russell Crowe and Jennifer Connelly. It’s about a mathematician genius who has to work through his battle with Schizophrenia. It was based on a true story of the life of John Nash. In it, he revealed his governing dynamics theory that upholds “the best result will come from everyone in the group doing what’s best for himself and the group.” (Nash) Those words may not resonate with most people, but I live by those words every day. It’s this theory that keeps me in the mindset within both my business and personal relationships that everyone must win or everyone ends up losing. It’s this theory that gives me peace with such a life-altering decision as divorce.

The LESSON today is to live the life that you’re supposed to live as long as it serves you and others well.

FUN ASSIGNMENT: What do you do in your life right now that serves you and others well? Write it down.

Read EpiBLOG 3: Rising From The Bottom >>