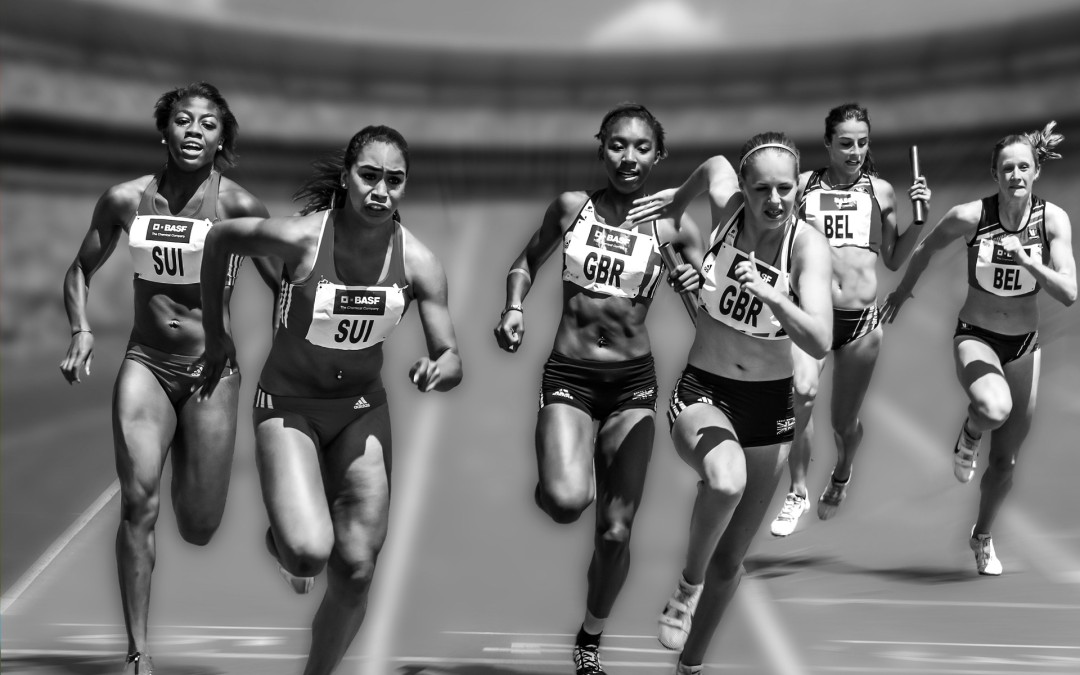 It was 1992 in Vienna, Austria. May 1992. Again, mostly overcast like that London trip just 1 year prior. Tends to be the norm with the European countries during the times of my visits for some reason.

I remember grabbing the baton from my teammate just as I had done 12 months before. Once again, I was the final leg in the Girl’s 4 X 100 Relay race. The young lady who had me beat by about 5 feet at this point before, seemed to be in the exact same position again. However, this time, I was even more so physically prepared. My body was ready to burst into turbo and my mind didn’t comprehend “defeat.” As a matter of fact, the word was temporarily deleted from my vocabulary as if someone simply pressed “backspace” on my head.

She ran her hardest once again… just as she had before. The gap closed between us and I saw the finish line ushering, begging for me to meet it.

The gap closed… and all of a sudden… I passed her up with sheer determination and met the finish line for the second or third time that weekend at that point.

Our team stood on the first place position on the winner’s stand. We won as a team. But I can’t help but to think that all of my hard work and efforts were rewarded. Would I have been able to catch up with my opponent had I not worked out for that past year?

Running against someone when you start at the exact same moment as they do is one thing. However, when you have to begin running AFTER the person in front of you has already gotten a head start, can be intimidating. Nevertheless, passing the person by who began running before you is one of the most empowering experiences that you can ever have, not in a “cocky-I’m-better-than you” type of way. But instead it’s empowering because you know that when the circumstances don’t look good, you have the ability to rise above them and succeed.

But it didn’t stop with the one race…

I hear the announcer yelling through the intercom, “Girls 100 meter finals.”

I made the cut, and so did the girl who beat me the year before in the last leg of the 4 X 100 meter relay. We get to our blocks. Warming up, remaining focused. I was constantly stretching my leg muscles because it was too cold out to risk getting a bad muscle cramp. I saw mental flashes of her crossing that finish line first last year. You would think that this would be the worst visual to have right before running side by side the same female champion. But it did the opposite for me. I thought about her crossing the finish line, and in my mind, I ran faster.

All of us girls – there had to have been at least 5 or 6 of us – we followed through with placing our spiked shoes within the blocks. I don’t remember the specific number of girls I was running against, honestly. All I can remember was being determined to win that day, so the only number that mattered was being the #1 sprinter to cross that finish line.

My fingertips were gripping the rubberized track like Spiderman himself scaling buildings in the late night hours.

All of us adjust our bodies to take off. Victory seemed to be holding its arms out to me, welcoming me with a great, big grandmotherly hug. You know the kind.

The gun is FIRED. And we are all off running.

The arms of victory are reaching out to me. My competitor, my muse and I, were running neck and neck until I crossed that finish line all by myself. If you blinked too slowly or looked down to wipe some crumbs off of your shirt, you missed the whole race.

The years 1991 and 1992 are what I think about when I’m faced with defeat as an adult. I think about that 15 year and 16 year old me who wouldn’t accept defeat as an option. It’s true – I am a little jaded now because I’ve experienced more of the realities of life. But the girl who lost one year and won the next is still within me. I’d like to think that I can apply those same efforts and principles to the adult Nitara. And I do. I do this constantly.

Today’s LESSON is if you want something bad enough, be willing to do what it takes to get it (within reason of not causing harm to another person).

FUN ASSIGNMENT: What is your greatest accomplishment and/or something that you’re proud of and why?